Campaigns Should Use Mobile To Make Difference In 2012

We know President Barack Obama's election team in 2008 made very successful use of social media to get their messages across and really got their base excited, particularly the youth vote. So you know team 2012 will continue that tradition and top even their successful effort.  Meanwhile, the GOP with Mitt Romney will at the very least try to duplicate that effort and may even have a few tricks up their sleeves.

Mobile and social media roles in political campaigns are just in their infancy.  The successful Tea Party movement that toppled the arrogant Pelosi regime in the House of Representatives in 2010 showed just that.  Now, the Democrats and its allies will do the same to the rigid and impotent Bohner era.  As you can see, I don't like either parties much.

In going through the presidential campaigns on the web, I tried to see how they compare on the mobile devices like the iPhone.  Not surprisingly, both the Obama and Romney campaigns wisely have their own mobile sites. 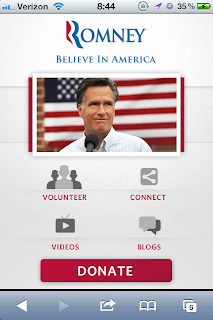 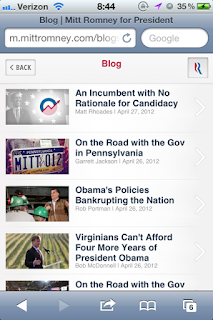 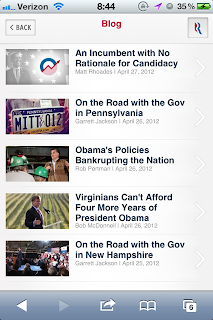 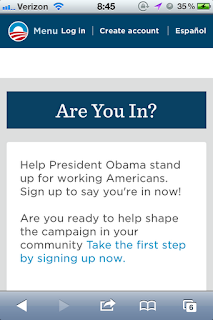 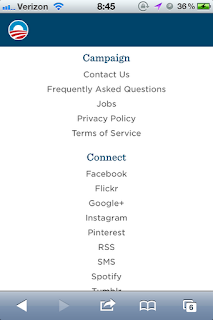 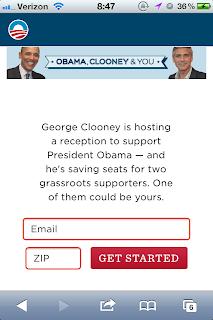 Here is President Obama's mobile site and here is Governor Romney's mobile site.  What's interesting is how generic they both appear to be.  The Romney campaign decides to go with the menu on its front page while the President's webmasters went with the direct appeal to voters.  It makes sense.  The President's reelection is virtually assured if he can get the voters who who voted him in to believe he has done as he promised.  Surprisingly, there is nothing in the Romney site that played up his supposed economic strength.

The Obama site played up Clooney. I'm not sure what that will accomplish. Oh, right, the woman votes.  I learned nothing about what a second Obama term means.  With Romney's blogs, it's attack, attack, where he's been, and attack.  Both campaigns offered little red meat.  However, President Obama did offer some of his accomplishments (though the GOP/conservatives/Fox News would beg to differ) so far in his first term.

As far as webapps, I think it's a tie with a slight edge for the President.

I also did an app search and found it difficult to see if either campaigns have their own mobile apps.  I had to do a Google search to confirm whether an app was truly the official campaign app.  There is obviously the White House app.  Then on the President's desktop site, I found a link for apps for his campaign.  It's for the iPhone and iPads only.  No Android.  Why?

And the Mitt Romney apps?  Nothing.  There is an app in the iPhone app store called Top Conservative 2012 with Mitt Romney's picture and that's as close as it gets.

For mobile apps, clearly, the Obama camp is leading here.  However, the lack of Android apps is clearly a mistake.

What I also see is the lack of efforts on both sides beyond meshing social and mobile with a clear strategy to convey their messages and maneuver into advantageous positions.  I like to see points and counterpoints for each move by the campaigns. Maybe a section ready for users to follow on debates.

Mobile is already huge and will have an even bigger role than radio and television.  I hope in the next couple of months, we'll see both sides take mobile warriors more seriously.