Twitter has grown up.  Not long ago, it was a way to tell your friends when you were going to the bathroom and what you were thinking while you sat on the toilet.  Then it became instrumental in helping people of North Africa get rid of a couple of dictators.  And now, Twitter is the weapon of choice for political machines, specifically, the operatives who are looking to slash their way socially to get their messages and mud across.

Here is a prime example.  In an exchange between David Axelrod (Twitter), the man who is widely credited by the media for getting then Senator Barack Obama into the White House (I know Oprah would beg to differ) and Romney advisor Eric Fehrnstrom (Twitter), the two got personal and traded jabs. 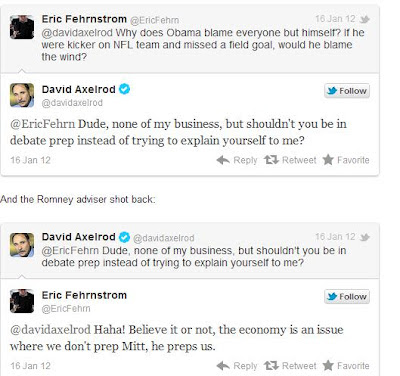 There more of this at the Washington Post piece.  Something about dogs mixed in with dogs and debates.  It's really quite interesting because, even now, Twitter is a vehicle for influencing the greater voting public because the media and the campaigns are picking up on this.

I'm considering creating just a separate Twitter account just to aggregate these political tweets because the Twitter may be where the winner of the November elections is decided.

And you know what else might be a cool Twitter.  A rap-off, or Twitter-off, between opposing rappers.  I can see it now as they fiercely tap on the smartphones.
on April 18, 2012