Source:  GottaBeMobile  via The Verge. 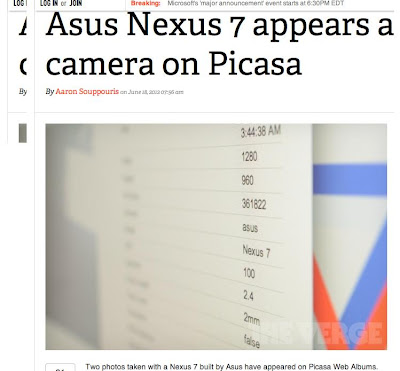 Okay, so there’s the iPad and an assortment of Android tablets today.  Oh, and let’s not forget the Kindle Fire.  That’ll be joined by some new Windows 8 tablet soon which will be announced today by Microsoft at .  Now, these are likely spy-pics of Google’s Nexus tablet.  Looks like a 7” variant (I say variant because I’m sure we’ll see other Nexus tablets in various sizes).

From the pic, it looks like it’s called Nexus 7.  From the imagine, we can gleam that the resolution is quite possibly 1280 x 960, which is at a much higher resolution than its likely closest competitors with the Kindle Fire’s and Samsung Tab Plus 7’s anemic 1024 x 600.  If I may go a step further into the rumor world, Apple’s unicorn iPad coming in between 7-8” is suppose to have only 1024 x 768.

Is this pic for real?  I hope so.  And there’s chatter that Google could price this to compete with the Fire at $150.  With the specs I’m hearing and at this price, it could be going after not only Amazon but Apple and Microsoft as well.  Personally, I don’t see an iPad or Windows 8 tablet priced at $150, much less $200.


Below is a video showing us what we can expect from Nexus 7.  The experience is likely to be similar.  I cannot way to see this tablet and how others from Apple to Microsoft to Samsung to Amazn/BN responds.