Where is Google’s Siri Response?


Competition is good for consumers in general.  And specific to the mobile market, the continuous battle between the various tech giants has been great for us mobile fans.  And with Apple’s Siri, it was an answer to Google’ voice commands.  And Siri, with its beta problems, is clearly setting the mark to hit.  So, I wonder where is Google’s , or Microsoft’s, response to Siri? 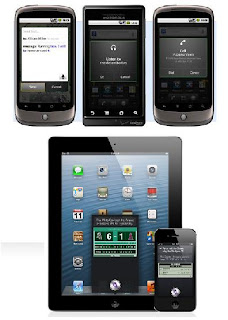 Yesterday, Apple unveiled iOS 6 with a marginally improved Siri.  I reckon it’ll still be a beta feature through the life of iOS 6 because I think there is just too many basic functions, that while works, require more improvements.  And this has offered Google an opportunity to upstage Apple, RIM, or Microsoft.

Perhaps, we’ll see Google’s Siri killer baked into Android 5 when Google releases it later this year.  Or it could operate as a standalone app being made available on competing mobile platforms.  Right now, we just don’t know yet.  In the past, there were rumblings of an app or project called Majel, named after Gene Roddenberry’s wife who was the voice of the starship USS Enterprise’s computer.

I think given the hyper-competitive atmosphere, Majel should prove to be ever bit as robust as Siri and likely offer a few tricks that Siri won’t be able to do as we know it now.

Personally, I like to see how Google’s take on a mobile assistant will differ from Siri.  On top of that, what kind of personality will it have.  Because, if you don’t already know, Siri definitely has a personality.  However, that is just one aspect.  There are plenty that Google can make Majel stand out from Siri.

Given my experience with voice search, Android already does an awesome job understand its users.  I reckon Majel will be just as good if not better.  And that could be better than what we know Siri to do now.  On top of that, Google has its own voice tech that could give Majel a more natural feel.  Perhaps Siri’s robotic, albeit femine voice, is a Pixaresque quirk, who would not want a digital assistant that sounds more natural?

From the WWDC keynote, the Siri demo was neat but I get the feeling that Apple could be holding stuff back for a bigger unveiling in the fall that could be used as a wow-factor to help it sell the next iPhone.

So, which Siri at this time seems like a low hanging fruit for Google’s Majel to meet, Apple has a habit of going to where the puck is going to be, and Google better do the same with Majel as well.  Siri in the fall will not be standing in the same spot today’s Siri is currently.