Always love talking about solar and mobile and there is another opportunity with my bit of twist.

Remember the above pic?  It was Toyota's solar flowers to promote the Prius.  And it was awesome!  I don't know if they're around still but Toyota could have and should have build more of them all over.  It was absolutely brilliant and I am somewhat disappointed that we haven't seen or heard more about this or similar concept.

Now, New York City is kinda doing something similar.  So far, it has converted 10 payphones into WiFi hotspots for the public to use.  And more will come. 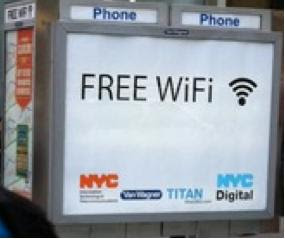 No word on whether this is powered by solar but since it wasn't mentioned, I highly doubt it.  Still, I reckon as more and more of these free WiFi hotspots come online and this pilot program works as planned, I'm hoping other cities will follow.  And there is absolutely no reason to think that this won't work at all.

In fact, I like to see cash rich tech companies jump on the bandwagon.  I mean this is right up Google's alley.  And there was also a time when Steve Jobs thought about establishing his own wireless network powered by WiFi hotspots.

This really is something we see coming.  Right now, ubiquitous wireless connection is only possible through 3G or 4G networks operated by gatekeepers that really don't have the public's interests in mind.  WiFi will be the key first step to wrestle control away from them.

When those super WiFi you might have heard about, those using White Spaces, that have wireless ranges that are not measured in feet but in miles (I'll be honest:  I'm excited by opportunities that White Spaces networks represent but finding out the exact range has been hard to pin down.  Probably because the tech is so new.)

That is a mobile  future worth working towards.  Maybe also then, I can get a mobile device that doesn't require me to subscribe to those evil wireless carriers.
at July 12, 2012