Mobile: Atlantic Wire Does A "China" In Hit Piece Against T-Mobile's New Plans

This is a horribly written article from the Atlantic Wire comparing AT&T and T-Mobile's new no-contract rates.  We’ll go through the errors and come to the conclusion that the writer or even the AW is bending over backward to make T-Mobile look bad and AT&T, probably a big sponsor for the site, look good.

The gist of the post is about how T-Mobile’s new plan is bad compared to AT&T for users and even trying to point out that T-Mobile could end up costing users more.  Let’s start shredding this post apart piece by piece.

First, even if the numbers used by the writer is correct, paying a bit more to get out of the thumb of AT&T’s draconian domain is worth it.  That in and of itself is a great advertising tagline.  Fortunately for folks looking at the T-Mobile plans, it’s actually cheaper to go with T-Mobile and AT&T's plans are actually more expensive.

Second, the numbers used by AW are wrong because while they’re comparing the same device, an iPhone 5, the device can be anything others.  A Blackberry or Galaxy S 3 which both carriers have.  So the cost of the device doesn't matter.  It’s the plans.  And this is where the writer is trying to make AT&T look better.

The writer used AT&T’s lowest $40 unlimited 450 min plan to compared with T-Mobile’s $50 unlimited talk and text plan.  The writer should have used the equivalent $70 plan from AT&T.  On top of that, the writer should have also included the $20 unlimited texting plan as well on top of whatever AT&T plan a subscriber picks.  The omission of the texting plan alone blatantly showed that the post was either paid for by AT&T or something far more sinister. 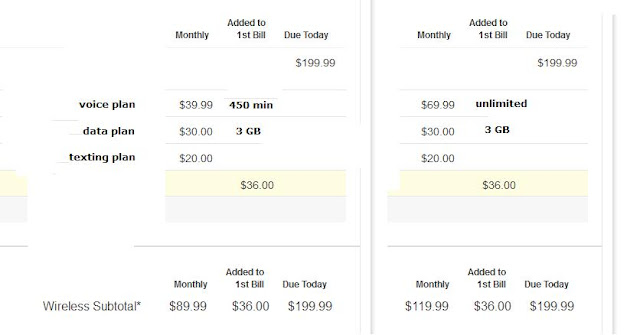 Had the writer used AT&T rates that are closer to what T-Mobile offers, it would come out to $2360 for two years for the 450 minutes plan with texting and $3080 for the unlimited talk plan.  Using the writer’s $60 plan to get the 2 GB data and the total cost of $2020 for T-Mobile, that’s still lower than AT&T’s lowest plan by $340 and a whopping $1060 less than AT&T’s unlimited talk plan over two years.

Let’s go even a step further and add more data on top of AT&T’s unlimited talk plan.  AT&T doesn’t offer unlimited data because it knows that its data network is crap and it knows that we know it.  But it does offer incremental higher data allotments with higher costs.  Again, nothing unlimited.

For 24 months, the subscriber gets jacked $3560 by AT&T to come as close as possible to what a T-Mobile user would have to pay.  I’ll make you do the math to figure out the difference.

That’s only the cost comparisons that matter, which the writer worked hard to avoid to make AT&T stand out.

However, the last point is the most important of all.  Regardless of whatever plan you get from T-Mobile and savings aside, the user isn't beholden to AT&T.  Again, the skewed comparison the Atlantic Wire writer tried so hard to keep users on it.  This point is pretty much the same as the first one I made above.

Yes, being freed of contracts and free of AT&T is just that important to me.

Now, this would be a perfect place to end the post.  But I also like to point out that even the writer's $1916 total doesn't make sense at all.

Note:  While you can argue that I've got an ax to grind against AT&T, that may be true but the numbers themselves don't lie.