Jawbone Up Getting Endorsement From Assad's Wife (Syrian Strongman)

My first wrist pedometer/calories counter/sleep band was the Jawbone Up. The first generation one and it gave folks trouble.  Which is why I switched to the Nike Fuelband as a backup. But even the Fuelband (already with one exchange) is dying (battery).  So I'll soon be in the market for something new. 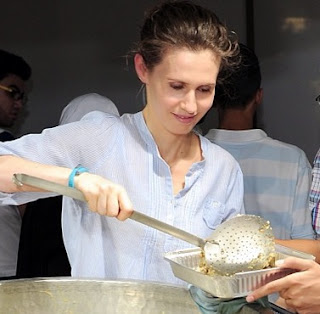 So, as I was googling and checking out the Fitbit, I came across this.  Apparently, Bashar Assad's wife uses Up.  So, I don't know what Jawbone thinks about this or if they even know.

The thing is, whatever reason the wife of a despot who brutalizes, murders, and rapes his own people and armed terrorists would choose Up, the thing is it is a very good device now that the kinks from the first generation has been worked out.

I'm looking hard a the Fitbit because it means stairs but I also like the ruggedness of the Fuelband.  And unlike the Fitbit, I won't lose the Fuelband or Up because they're constantly on my wrist.  Plus, the Jawbone Up has awesome battery life.

My main issues with Up are two.  One is the cap that I constantly loses and the other is that there is no display to show progress.  I would constantly have to sync it with my iPhone.

Until my Fuelband is completely dead, I'm hoping we'll see updates from these companies in time for Christmas.  And maybe with better features and longer battery life.