Mobile: T-Mobile In Its "Unleash" Plan Will Offer 200MB of Data To All Its Tablets

Initially, I thought it was just the iPad but it looks like T-Mobile will offer 200 MB of free data a month to all. I think this just about says it.  Supposedly, they've got a $10 a month plan as well.  I can see them going with one GB for $10.

This pic from T-Mobile's twitter feed just about says it. 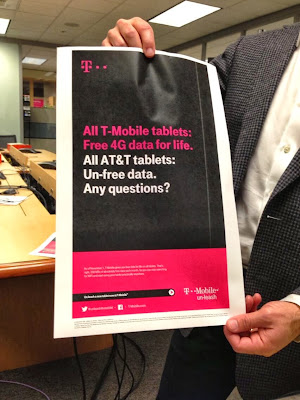 Tmonews has more information. The gist is that you can get unlimited data for $10 a month with the first 500 MB at LTE speed.  And you know what happens after that, right?  It's down to EDGE speed of course.  For none intensive use like messaging or e-mailing, that ain't bad at all.

Then there's the T-Mobile scheme that allows you to pay for the tablets over the life of 24 months.  Already know that part.  Nothing new there.

This definitely is a game changer.  Guess which network I'll be getting my tablets from from now on?
on October 23, 2013