Prediction: iPad mini With Retina Display Will Go On Sale On...

I think the iPad mini with the new Retina Display will go on sale on November 15th, two weeks after the iPad Air goes on sale.  That's my own prediction and nothing more.  I think I have a perfectly logical explanation for thinking it'll be on the 15th, and not any other Fridays in November - that being the 8th, 22nd, or the 29th. 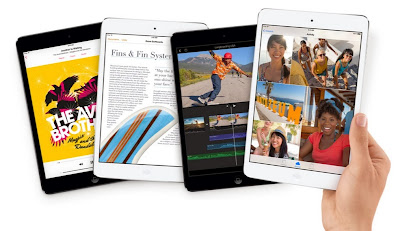 And obviously, we can forget about November 1st, this Friday since that's the date Apple picked to start selling the iPad Air.

So, what makes me think that Apple will begin selling the new iPad mini with the new Retina Display?  Just some common sense and picking the odds.  Obviously, it can't be the 29th, that is Black Friday.  Apple is not going to try to deal with a rush of Black Friday shoppers and the iPad mini crowd.  No way they'll do that.

That leaves the 8ths and 22nd.  I don't think it's the 8th because it'll only be a week after the Air goes on sale and, personally, if I run Apple, I would give the Air a bit of "air" to itself before releasing another product for sale.  And the rush to the website and the stores for the Air will continue to be fresh even a week later.  It'll continue to be quite busy for Apple employees.

Apple always has a crowd for the Christmas shopping days and it doesn't need to exacerbate needlessly the situation.

That leave the 15th and 22nd.  I don't think it'll be the 22nd because it's a week before the Thanksgiving week and Black Friday. For the nearly the identical reason why Apple will not sell the iPad mini on Black Friday, 22nd won't be either.  It's just cutting it too close.  Imagine the onslaught of the crowd and the online rush to try to get the new mini.

That leave the 15th.  It's two weeks after the Air has been on sale and two weeks before Black Friday.  And since Apple typically releases new products for sale on a Friday, the 3rd Friday of this November makes the best sense for the iPad mini with Retina Display to go on sale.

Apple can obviously break its mold and start selling the iPad mini on another day of the week but I find that unlikely at this time.  So, I'm gonna go out on a limb here and say it's the 15th.  Hey, I would not mind being wrong if it's the 8th but I hate for Apple to start selling the mini later in November.

Note:  I was right in my prediction about the iPad event date.  Think I can make it 2 for 2?