Working From Home: Was Not 100% Ready

To start, I'm as productive as I have ever been and as productive as I can be compared to two weeks ago when I was working at my company's office.  In fact, I think I managed to get much more done in a shorter amount of time.  However, it has not translate to me "getting off work" at 3PM instead of 5:30 PM like I normally do.  The main reason is that I was not ready for working from home.
Internet Connection:
First off, you are only as productive as your Internet connection.  And while my Internet connection, courtesy of Comcast (yeah, yeah, I know...), is up a majority of the time, the speed is kind "meh".  When I am doing mindless Excel calculations or setting up a new sheet, there isn't a whole lot of thinking that needs to be done.  So I like to have something play in the background - video from Netflix or one of my science fiction shows.  But that could slow things down at times if my wife is also streaming her own stuff, well, it's hit and miss.  Oh, did I mention that we have security cameras as well?
All I can say is that it's 2020.  I got my first non-analog Internet connection in 1999 via DSL.  It's been 20 years.  I expect a minimum speed with 99.99% up time for the connection. I'm supposed to be 100 Mbps for what I paid for.  I'd be happy to pay the same amount per month at 50 Mbps if the connection doesn't drop and I don't have to reset the modem every other day. 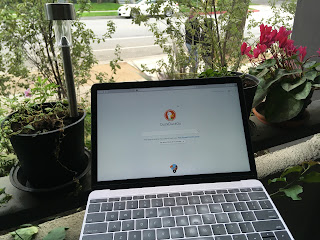 Hardware:
I have a 2016 Macbook. A 2019 iPad Mini.  iPhone SE and XR.  I'm crunching Excel sheets with around thirty thousand lines and the formulas that took me a long time to set up that are linked to other sheets.  So I have multiple sheets open along with a browser, Outlook, the native Mail app, and the Messages open.  There are lags between switching apps at times and Excel not working when it's "thinking".  It's like that on my Windows 10 PC at work as well but it is faster with the work PC.
At the time when I got the MacBook, I had not anticipated that I would use it as a work laptop.  I expected to be using for writing and simple content creation, and learning to code.  And if there was work that I need to do for my company, I thought I could use  iWork or use the online Microsoft Office apps.  I even thought I could use the mobile version of Office  as well.  Alas, iWork does not have all the tools I need.  Nor does the mobile or online version of Office.  Microsoft really should have called those versions "Office Lite".
If I had known that I would be using my personal laptop for work, I would have been more careful about the MacBook that end up getting.  Prior to my MacBook, I had a 2013 MacBook Pro.  I would have to be more careful about which Mac I get in the future.  However, who knows what Apple's road map is going to be in a couple of years.  There are rumors that Apple could move away from the Intel chips and use chips that it designed like the ones that power the iPhones and iPads.  I would except those Macs to be pretty juiced up to at least the same level of processing power as the ones powered by Intel.
But that's a question and decision for another day.  I anticipate working at home for another month with the safer-at-home order being extended and will likely be extended in California through at least early May and my company being very adamant about keeping us at home.  After that, I may not feel that my MacBook being underpowered once I return to working from my office.
Environment:
I can work anywhere.  I'm one of those people.  I have something I need to get done today, I'll find a way to get it done.  I'm kinda Jack Bauer about it in that sense.  my mind starts running in different directions until I find a path that will get me there.  It's nothing special.  I'm sure most people are like that if you think about it.  We all manage, right?  Work, home, life.  All those things combine to make our lives interesting.
So, I can work on my bed, living room, backyard, or sitting on my steps outside my building.  Currently, we are working on the dining table.  We squished our laptops together, a small lamp for an ambiance, a couple of plants, a humidifier, iPad, an USB hub, and our phones.  And lots and lots of wire.  As I mentioned above, I have something playing in the background at times.  So, if it's something my wife probably would not listen to, I have a cheap Bluetooth earpiece that pipes the sound from the video or podcast or music through it.
Preparedness:
Nah.  I was not ready at all.  Ideally, one I was given the instruction to work from home, I should have been ready from the start, right?  I have had to go into the office twice a week the first two weeks.  And once last week.  That's five times.  I would rather not go in at all.  I probably will not go in starting next week.  I still had to go in and get files.  When I did go in, I was working on transferring files to the cloud or scanning docs that I needed or thought I needed.
This is very valuable lesson I learned as far as being mobile, not just working from home.  Before the pandemic, we were making plans to travel more.  We took a few short trips last year but nothing like being away from the office for the whole week.  And my iPad mini was up to the task.  Did not even think about bringing my MacBook.
Bottomline - I was fine if I had to be away from the office for a few days.  But working from home never crossed my mind.  I pride myself in thinking ahead a lot of the time.  When it came to this, I really did not anticipate it.  I would not chastise myself and conclude that I dropped the ball but I certainly have learned from this experience.
All in all, I manage to get what I need done most of the time and my productivity has been up.  If work said that I could work from home forever, I would be very happy to do just that.
at April 04, 2020