Apple Watch Needs A Thermometer - With Heart Rate and Oximeter and Other Health Data, It Could Help Users Avoid Spread Covid

Apple will release the next Apple Watch in less than 2 months.  There are a lot of rumors out there but there is no concrete evidence what new medical sensors will be included if at all.  While oximeter is the likely candidate given the era of Covid we live in (and Apple likely has been working on it for years), another overlooked feature is just as important it not more so:  a thermometer.

When I was little, electronic watches was all the rage.  Watches that play games.  Watches that has a number pad on it for doing calculations.  The Apple Watch can do all that.  But I also had a Casio watch that was able to give me the temperature.  I did a search on Amazon and found that Casio still sell watches like these.  For you kids out there, sure look and feel a bit vintage.

During the initial month of the Covid lockdown in Asia, I often saw someone outside of a building taking temperature of people before they are allowed into the building.  I thought that was pretty cool.  We see that here in the US but it's not enough.  Often, the infected are asymptomatic and able to spread the disease.  With the right combination of sensors, we might be able to detect possible infections before symptoms develop.  In a study, researchers found signs of Covid infection 9 days before symptoms developed using watch sensors.

Consider if Apple Watch, which already has a heart rate sensor, is paired with an oximeter and body temp sensors, it would provide even better warnings about Covid infection and perhaps even earlier warning signs. 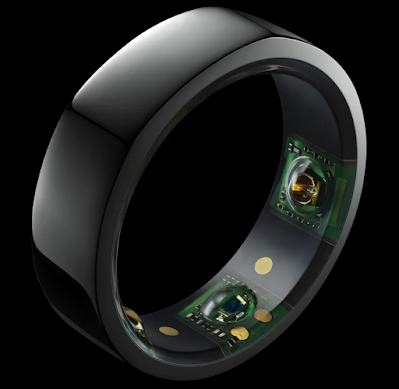 A ring called Oura has a body temp sensor that is widely used by the NBA in the current season at the Orlando Bubble. With the Oura, the user is able to get a wide range of data on his or her body through the day, it even tracks sleep.  This allows the user or in the case like the NBA, to see the readiness of its players and see if they could be suffering from any ailment like Covid.

An Apple Watch with similar sensors could also do the same thing, and possibly more given that there is a bigger market for it than the Oura at this point.  With more data, volunteers could also allow researchers to pool more information regarding health and diseases.  A variety of early warning signs could be developed not just for corona viruses but others as well.

And I could really use something like this for my Apple Watch.  There are been times during the last couple of months when I thought maybe I was infected.  I could not tell if it was just allergies or something worse.  Of course, once I turned on the air filter and after half an hour or so, my symptoms went away. Perhaps with these sensors in my Apple Watch, I could save myself from worrying about nothing.  After all, I had not gone out during my allergy period so it was not likely I had caught Covid.

Oh, if I want all that now, I can get the Oura.  However, I'm not a ring person. As great as the Apple Watch is, well, let's just say that I tolerated it on my wrist.  I would not want something that I have to wear 24/7 on my fingers.

Bottom line is that there is much improvement that Apple can make to the Apple Watch.  It's impact has been felt widely, mostly from people staying or getting healthier, but also from people saved by the watch because it had warned them of a previously unknown medical condition.  With the oximeter and body temperature sensors, the Apple Watch and save tens of thousands more if not millions during this pandemic.

Note:  Here is a link to the Apple Watch at the Amazon store if you like to help out.  I don't know how much I would get from Amazon if you buy your gears from them through my link but anything would sure help.