Siri: Week Two, Any Change In Your Mobile Routine?


It's been two weeks since the iPhone 4S went on sale.  By now, I'm guess about 6 to 8 million iPhone 4S's have been moved off the shelves and into user hands all over the world.  I reckon we'll see 10 million by the weekend as the 4S goes on sale in more than half a dozen countries.

So, I think I'm in good company when I ask you.  Has Siri changed how you do things with your mobile device?  Now, if you're new to the whole smartphone scene and the 4S is your first mobile device, I can safely say that you're blown away. 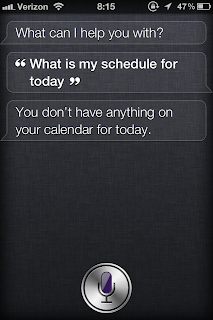 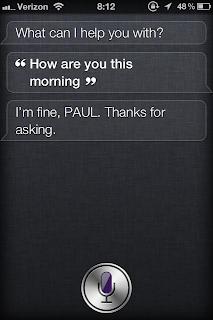 For the rest of us, Siri could be the reason why we upgraded.  And I can tell you this.  I'm blown away just by what it can do as well and it's only in beta.

What can it do?  Well, it cuts down on a whole lot of tapping away on the screen.  You speak to Siri, make a request. Task done.  Making calls, sending messages or e-mails, or schedule an alarm or appt.  But that's the easy part, isn't it.

It's the search for answers.  And if your questions are directed, you can get most answers from Siri directly.  No more opening the browser and typing in your search.  No more opening up Google app or going to search. It really bypasses the whole routine. 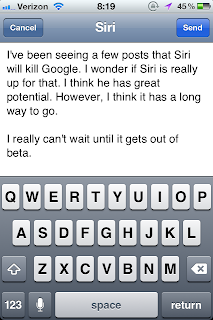 Maybe this is why I've been reading more than a few posts about the threat that Siri is to Google and search as we know it in general.  Imagine what happens in a few years.  Never mind that.  Just think what'll happen once Apple brings Siri to OS X on the Mac! This alone could change the whole PC dynamics even further. 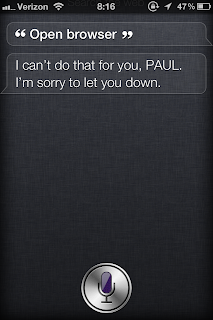 As you can from above, there is still a few things that Siri cannot do by command.  I don't know if this is a beta thing or not.  I am pretty certain that most tasks like this will come to us soon.

You'll be be getting a couple more posts on what I think Siri can potentially do once its out of beta and when migrates over to the desktop.
on October 28, 2011