Kobo has announced a new Android-based tablet (the smartphone flavor) that will cost $199, same as the Kindle Fire, but it will be severely under powered with only a 800 Mhz single core chip.  However, these days, specs are not enough to sway an user to one tablet or another. 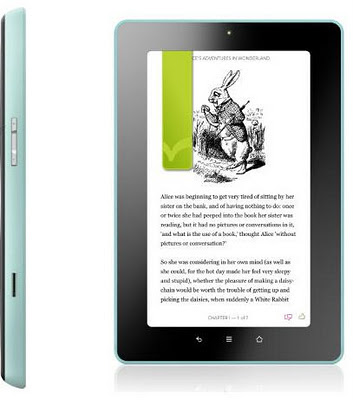 What's interesting about this is an attempt of a social book club.  And here's the thing.  It has a 7" screen with the same 1024x600 resolution as most other 7" tablets.  What's different about its screen is that Kobo claims to use an "AFFS+ display with anti-glare" - same tech used in airplanes.  That was what caught my eyes.  Right now, as you know, tablets are not all that great for operations outdoor.

It doesn't stop there.  Free RDIO music stream, games and 15K apps.  Yeah, the Vox has will have more apps than the Touchpad and RIM's Playbook put together. Those are not the only freebies.  As I recall, neither the Kindle or Nook has this kind of material to start the users off.  Of course, we don't know if this is an app store that it is operating on its own or that its using someone else's.

So, why Vox?  Kobo has no choice but to join the tablet rush.  It's totally a defensive move.  It's an attempt to fight off Fire and Nook. And if it does succeed, the Vox will be a building platform for Kobo to expand its offerings.  The loss of Borders stores likely has hurt it greatly because Kobo e-readers were sold there. 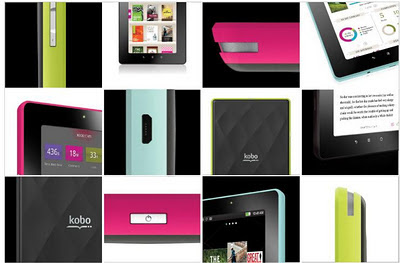 At the end of the day, any kind of competition in the tablet market is everything we mobile warriors can ask for.  The Vox is not going to challenge the iPad and Galaxy Tabs of the world, but it could hasten the price drops in the sub-10" tablet market.

Amaon remains the strongest in this part of the market because of the strong Kindle brand.  It remains to be seen if these ereader companies turned tablet sellers have what it takes to traditional tablet makers.

And at Vox going for $200, the same price as the Kindle Fire, Kobo is sending a clear signal that it wants to fight for what rightfully belong to it.