Concidence: The Winner of the Apple's 25 Billionth Download Is...

The winner of the 25 billionth app downloader from the App Store is Chunli Fu of China.  Rumor is that he downloaded Where's My Water?, which he didn't pay for since it was the free version.  Nevertheless, I want to congratulate the dude for it.  He deserves it.  Fu won $10,000 as well as a lot of recognition. 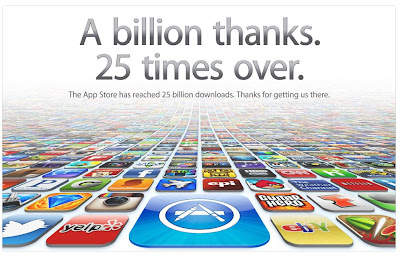 Now, comes the part that I wonder if this is just too much of a coincidence that with China being such an important market and opportunity, an iOS winner from China wins this prize.  I mean, seriously, you cannot ask for a better PR campaign than this.  It's likely that with all things Apple, this is getting a lot of positive press.

On top of that, there is the iPad trademark battle with Proview.  I'm not sure whether if Apple or Proview has a more positive image in China.  I read a post that many Chinese on Weibo believe Proview is attempting to extort money from a cash rich company like Apple.  So I reckon Fu as winner of the $10,000 prize is a very positive thing.

Look, I have to point this out.  I'm not saying that Apple fixed it so that the winner will come from China.  However, Apple could not have asked for a better winner than Mr. Fu.