March 06, 2012
Apple recognizes the importance of the Chinese market to its mobile and computing focuses.  Mac sales are doing pretty well, growing faster than the US and Europe while mini-riots break out for iOS launches. Oh, let's not forget about the gray market for Apple goods because Chinese launches lag US and EU launches by months.

So, when Apple release the Mountain Lion beta, few were surprised that Apple integrated some popular social network and email services popular in China and most agree it makes a lot of sense for Apple to make it easier for the Chinese mobile warriors to integrate their contacts, calendars, and social needs into their iOS devices and Macs. 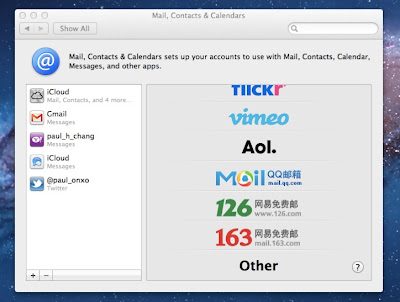 I've no doubt that iOS 6 will bring similar integration for the same Chinese social services.

And this is likely just the beginning as Apple begins to show the fruits of its work to make its products even more appealing to the Chinese market.  And it's likely that others like Microsoft will offer Chinese specific features.  We know that Renren, a Facebook clone, will headline Windows 8.

Essentially, we are seeing the beginning of developments for the average Chinese mobile warrior.  And going forward, not only will such developments accelerate, it's like future OS developments, specially in the mobile area, will be influenced by the Chinese market.

As a mobile fan, I am excited by the possibilities, especially if it's develop by Apple's focus on ease of use and on what "just works".

Note:  I'm unable to find some sharing options like Weibo and Vimeo-like video sites.  I hope it's just the fact that Mountain Lion is in beta and that once the final version ships, those options will be right there along side Twitter, Vimeo, and others.