We Have Our New Steve Jobs 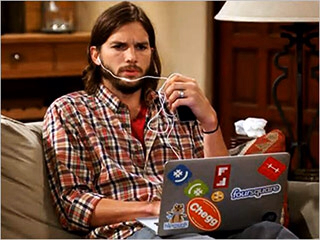 It looks like Ashton Kutcher will be tasked and given the honor of playing iconic and legendary figure in today's most revolutionary tech market, Steve Jobs. Man, I really killed that first sentence didn't I?
Here's the things, I don't know what to make of it. Steve Jobs' role in bringing about the computer revolution on the 80s and the mobile revolution with the iPhone. Along the way, Apple, under Steve, really changed more than just music, computer, and mobile but with the whole ecosystem, it changed the way society operated and how we deal with each other.
So, a guy who has done well for himself but can hardly taken seriously as an actor will play this man, the man who was mourned by millions upon his passing.
I seriously hope Sony knows what they are doing.