Green/Mobile: Kickstarter-Based Solar Charger Promises Results As If Plugged Into An Outlet 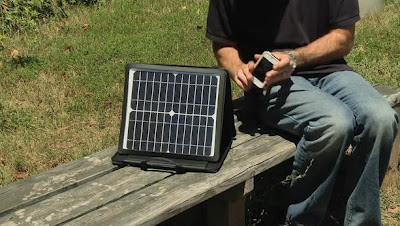 A solar charger for mobile devices that doesn't suck.  Well, here we have it.  And I don't know it will suck or not but I think I'll be funding this Kickstarter project because it is the closest to the Holy Grail of mobile solar charging that I have ever seen

The SunVolt Solar Power Station charger offers the ability to charge devices via the sun (on a clear day) as quickly as if you had your mobile devices plugged into a regular old socket.  Obviously, others have promised similar performances but results have varied - generally from not working to very slow at best.


What I like to be able to do is to plug this also into a portable battery that I can use as an emergency when I don’t need to charge my devices at that moment. Obviously, having a backup battery would be very useless in many situations. Personally, I thought of a few right away: a wind or rain storm that knocked our our power last November, this past weekend, I was at a Hawaiian fair where electricity was hard to come by at times, and, of course, during a zombie war or vampire infestation when you fear treading out at night.

I suggest you head over and check it out at its Kickstarter page.  I'm looking at the $180 level so I can get two chargers.  And if this works as advertised, I'll get more later for family.
at August 21, 2012