Tablet: Android Verus Chinese Android, Who Developers Should Focus On

Here are two distinct charts regarding tablet market size that could be of interest to not only mobile fans for trashing talking and consumers who want to know where the market is headed but developers who want to best put their limited sources to work.

The first is an IDC chart that has the breakdown clearly between Android, iOS, Windows, and others. 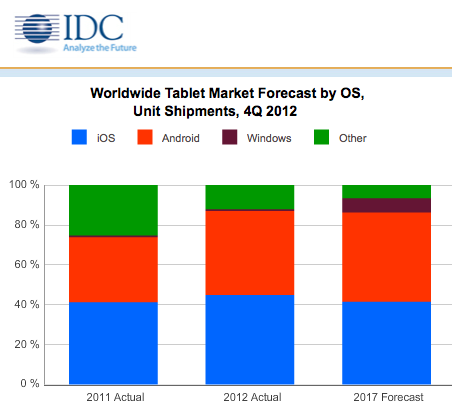 The second one here is one that shows Android deployment with and without Google Play as its default store.  What's interesting is that the official Android deployment ends up with a smaller piece of the tablet market share.  However, given the similarity between Google Play and Amazon's own app store, the two could be put together.  The only thing is that Google does not benefit from sales in Amazon's Kindle app store and the same is true for Amazon not benefiting from Google Play. 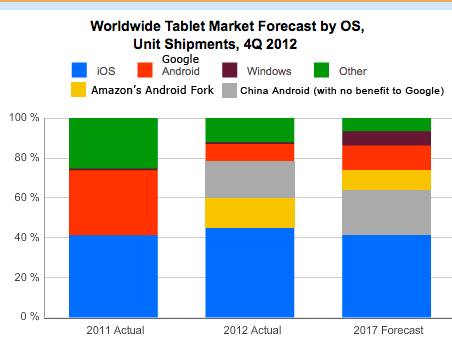 On a whole, iOS does remain the largest tablet deployment because of how Apple operates, developing the iOS and iPad hardware and managing the iTunes ecosystem.

Techpinions does try to state that it's trying to stay objective about how Android is forked.  However, I cannot help but think that some of those Android apps in Google Play and Amazon's app store won't find their way into the Chinese Android app stores.

For Apple, it has its own business plans and strategy regardless of what Amazon, Google, or even Microsoft does.

As for Google, it has to recognize that it will unlikely benefit from much of the deployment in terms of media/app sales and could lose out if other brands take hold.  For instance, in the phone market, Samsung clearly has the upper hand among the Android device makers.  Should Samsung decide to fork and open up its own app store, Google will continue to lose out.

That has got to be the fear for Google.  Even now, Amazon's Kindle tablets presents a danger to Nexus tablets because of Amazon's more closed model.  Should Amazon achieve the level of grand awareness in the tablet market that Samsung has clearly done with the Galaxy and other Android devices it makes, Amazon's size of tablet market as well as app store purchases will increase further.

The one with the biggest problem is Microsoft.  It could remain a distant third as its Surface RT has failed so far.  For the rest of 2013, it has got to show consumers that Windows is a clear choice.  The RT and Pro confusion has to be dealt with.

Of course, Apple's share isn't safe either.  Hardware aside, iOS has to continue to show consumers it has what it takes to become a modern mobile computing platform, not just a media consumption device.