Consider this.  A watch that doesn't immediately tell you the time but if you ask it or install an app on it, it'll tell you.  That may well be what Apple, Google, Samsung, or any of the consumer tech giants are working towards.  A watch that isn't a watch.  That may be key to the wearable device buzz going on right now - convince consumers and a new generation of mobile warriors who don't wear watches to wear a device on their wrist or body that has other helpful benefits other than telling time or getting notifications from their smartphones which is likely on their persons anyway in their pockets or bags.

A watch that is not a watch.  In fact, any thinking of a wearable computer has to be very much removed from the idea of a watch.  Consider what Dick Tracy has to do to access his watch.  Or remember Michael Knight in Knight Rider?

Our heroes always have to move their watches close to their mouth to do anything.  I think that's so dorky.

Rather, any wearable devices that is going to change or augment how we work or play will need to work more like the comm badges in Star Trek The Next Generation.  They wore the badges on their chests and tap it when they need to access the computer or speak with another crew member. 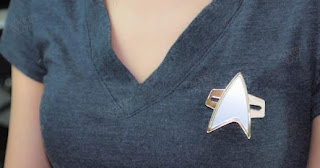 In fact, such a wearable device, say from Google, may have an always-on feature where the device's microphone is ready to pick up a command.  (Privacy issues aside of course.)  Thereby, bypassing the need for the user to activate or tap the device to access it.

And there are two main factors that is going to be very important if they want people to wear these in one fashion or another.

The first one is battery life.  No need to go into this too much because the reasons why such a device to sip power is obvious. It needs to have an insanely long battery life.

The other is weight.  I use a Jawbone Up.  I also use a Nike Fuelband which is bulkier and heavier than the Up band. I don't use both simultaneously if you're wondering about that. Both are sufficiently light enough that I I don't mind wearing them on my wrist or clipping them to my belt all day.

It wasn't like that with a phone.  Since I started carrying around a phone, a flip phone all the way to the smartphones today, I don't like that I have to carry one because they're still kinda heavy.  They've gotten lighter and lighter but you can still feel it.  And at times, I felt compelled to take it out and leave it at home, in a bag, or just not on me.

A wearable device cannot be so heavy that weight is a consideration or bother.  As light as the iPod nano is, I still consider it to be too thick, bulky, and heavy.

So, a small, thin, and light Star Trek comm badge-like wearable device would be ideal.  And one last thing, it needs to be operable with just one hand.  But you're probably asking one very important question.

How well can your comm badge idea instead of a watch work?  Well, three 24th Century-based Star Trek series, seven years each,  and 524 episodes later, the comm badge was just as important in each story plot as the warp drive, probably more so.