Great news, folks.  Gotham City is once again safe.  Thanks to not Batman (he had a small part in it).  Not one of the various Robins.  Not Nightwing.  Nope, not Superman either.  Or the JLA.  It's Batkid!!!

That's right!  Thanks to Make A Wish Foundation, more than 10K fellow Americans, and thousands if not millions of us on social media cheering him on, Batkid, aka Miles, roamed through Gotham (San Francisco) to save its citizens from evildoers.

What's more, many are cheering him on via social media like Twitter.  Tweets from famous folks, politicans (some of them I like Batkid to deal with, and even the President of the United States. 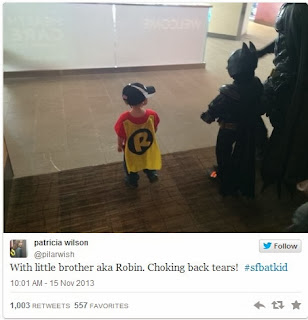 This has got to be one of the best stories of 2013.  It's just so heart-warming to see what Americans can do even for a 5-year old when we work together.

And Miles, continue the good fight.  We're all pulling and with you!

Also, never once did the Make A Wish Foundation expect their website to crash.  And only the Batkid could do that!