COVID Update: I think I Am Getting Better But Not Out of the Woods; Apple Watch Helped Me Find Trend (Downward and then Back Up)

My Apple Watch oximeter has been return values of 91-93% during ongoing battle with COVID-19.  Prior to my infection, I have never seen anything lower than 94%.  So, something definitely is affect my ability to breath properly.  If I breath too deeply, I would get into a coughing spell that affects my upper body and it would ache all over, feeling as though my body is going to fall apart.

I have been getting chills and spikes in temperatures, usually signaling that it was time for another Tylenol.  And last night, I woke up after finding myself in heavy sweat but feeling much better than any other night.   I am still trying to determine if that is a good thing or not.  It happened again this morning as I was working.   I felt cold but it was not the type of chills I was feeling earlier during the week - they felt like the cold embraces of death's fingers. 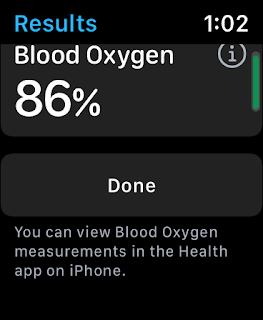 I saw a few in the range of 86-91% for a day before climbing back up.  The 86% was the lowest.  I was about to emailed my doctor but I decided to wait it out and see if my condition continue to improve.  Luckily, it did.

I don't know how accurate my Apple Watch 6 oximeter really is.  I have definitely used it as a general guide to see how the trend goes.  Prior to getting Covid, I had been running a lot on November and had seen my oxygen level gone up a couple of percentages to 98-99%.  I was pretty excited by it and the weight loss I was losing.  December was supposed to be a continuation.  But then...

As these last few days, I saw a downward trend when I started developing breathing issues and the trend back up.

Overall, I'm really glad I got the Apple Watch 6 just for its ability to measure the level of oxygen in the blood.  Again, as far as accuracy, well, Apple may need to work on it.  I really don't know (I have read a few articles regarding the accuracy of the oximeter but not really seen anything support its accuracy) if Apple needs to or not.

What I find most annoying are the unsuccessful measurements.  I'll have to test the placement of the watch on my wrist to see if I get more successful readings than not. Or else, Apple has do something for users to get better and successful readings or through better hardware upgrade on the Apple Watch 7. 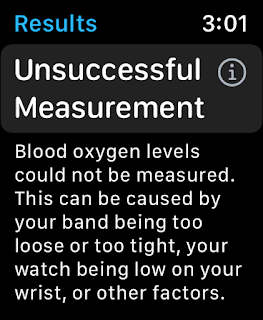 Again, if you're contemplating whether to get the Apple Watch 6, hands down - Yes!  Get it!

And to my dear readers, stay safe and head all safety protocols and public health guidelines and warnings. Covid sucks.

2020 - News, Social Media, and Your Bubble - Perfect Storm For Echo Chamber and What I Did To Escape It

Wow, 2020.  It's not over yet and if you read my previous post, well, things have gotten worse.  And yeah, it was COVID related.  When we look back at this year, will we be talking about the pandemic, Trump and the election, or something you read on social media - maybe it's a conspiracy theory or two or a group of like minded people reinforcing certain ideas and notions, bouncing back and forth in a social chamber?

The roles played by social media without a doubt will be studied for years to come.  The focus will likely be the deleterious effort it had on open societies such as ours.  And the question will be if this was a temporary effort and for a period of time or will others takes things further. 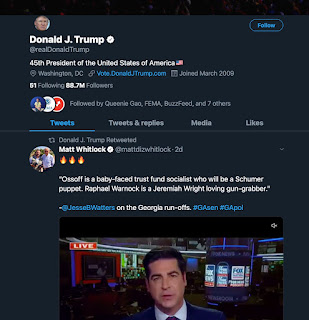 Here are some questions that needs to be answered:

With the election behind us, President Trump has not only refused to concede but continue push a dangerous narrative that he lost because millions of Americans are part of a conspiracy to rig the election against him.  His latest tweets in the last 24 hours has been from his Georgia rally yesterday.  He has continued to feed his base, demonized the Democrat senate candidates, and recycled the same rhetorics from the presidential campaign.  Frankly, it's par for the president.
We will not know until after Biden is sworn in and starts living in the White House how Trump will use social media.  It's unlikely we'll see anything different.  We have seen in this term that Trump has not shown a willingness to learn and change.
As for Biden, we may look at the Obama administration for guidance with one big change:  a more engaged White House speaking to the American people.  One of the first acts Biden plans is to request Americans wear masks for 100 days.  I can expect Biden or Dr. Anthony Fauci to continue to engage the public on a more personal level.  At the same time, Biden's last week was on 11/7, the day after the election stating "America, I’m honored that you have chosen me to lead our great country. The work ahead of us will be hard, but I promise you this: I will be a President for all Americans — whether you voted for me or not. I will keep the faith that you have placed in me."
It is likely the Biden administration will use official government accounts to relay social media messages vs President Trump using his own account.  At the current stage, Trump has almost a 4.5 times advantage in followers over Biden (Trump has almost 89 million followers vs Biden at 20.6 million.  President Obama has almost 127 million.)
As for the rest of us, who will we follow and how will we use social media in 2021?  Personally, I do not updates much as I used to.  And I'm all over the place when I do tweet - tech news, opinions, and, occasionally, a social/personal one.  For me, social media is a tool.  I use to gather information and sharing tweets. I try avoiding becoming a mindless drone among legions of retweets.  I like that Twitter is looking to implement an extra step to keep people from simply hitting the retweet button - basically, you're forced to read the post first before instinctively retweeting it (Techcrunch).  Other features like a warning to users about liking tweets with misleading information.
Social media will continue to grow and mature over the next year as they fine tune the social graph to avoid much of the more free Wild Wild West of the last four years.  I think that's good and users will respond accordingly.
on December 07, 2020 No comments:

We found out this morning my wife has COVD-19.  She's fine.  I went to get tested today.  Initially, the doctor told her that she has a cold since she does not have breathing issues.  We used the oximeter on Apple Watch to keep tabs on our blood oxygen levels (so far so good - there were times when it did not work).  Right now, there is a lot of technology out there to help us keep safe and with recovery.

One thing that technology cannot duplicate for you is common sense and keep following the rules - social distancing and wearing masks.  This is not an issue about being macho (like it was for me way in the beginning).  I quickly adopted wearing masks.  More than the fact that "everyone is doing it", I want to make sure I do not infect anyone else.  In order to do that, I must not get infected.

Of course, too late for that now.  We are fine.  But we are waiting for results for other people who I have come intact with.  And a couple of them are in the high group.  If anything happens to any of them, I wish I could exchange places with them. 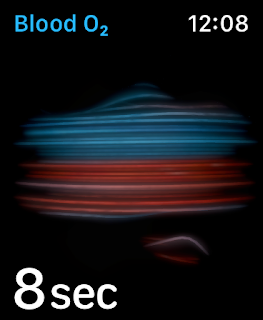 Since this is mostly a tech blog, I want to convey to everyone that there is nothing more important than using common sense and following the local, state, and federal guidelines when it comes to Covid.  It's very infectious and it can really ruin your day if not your life.  I feel this episode has left a mark on me that will live with me for each and every single day.

I am in a position that could irrevocably change other people lives for the worse if not their deaths.