It looks like Amazon will be unveiling its Kindle tablet on September 28th in a media event at 7 am PST or 10 am EST. 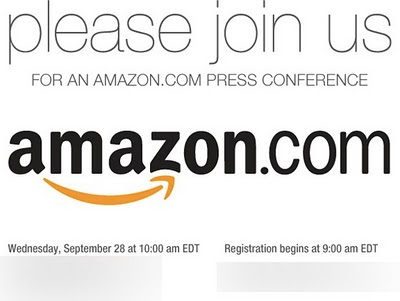 This could be the Nook competitor that everyone's been talking about.  Also, some might way, the iPad killer as well.  The thing Amazon does have going for it is that it has a pretty massive ecosystem like Apple's.

It'll be interesting to see what this new 7" tablet can do and how Amazon plan on enticing us to pick one up.  Also, we know that the Amazon tablet will run a variant of the Android OS - it has already launched its own app store.

More than anything, Amazon, like Barnes and Noble with its Nook, could be more successful than the likes of Samsung, HTC, and others in the tablet market because of their radically different business model.  While these tech giants are competing with Apple's iPad - making money through selling hardware, Amazon and Barnes and Noble are offering more simple devices to help them sell digital contents.

And the advantage will go to Amazon over Barnes and Noble in that regard.

We'll just have to see what we get and how Apple and Barnes and Noble will respond.  Apple is widely expected to have an event the week of October 3rd to unveil its next generation iPhone and iPod touch.  I've always suspected that Apple could unveil a bigger sized iPod touch.  No word from Barnes and Noble on its Nook Color upgrade plans.