Amazon Had A Bad Quarter; Could Get Worse Long Term Once Apple Gets Into Payments


You know what's interesting about Apple's 30% cut from apps to movies to books?  It's 30% of someone else's money that it is taking for itself.  Now, Apple has said that the 30% take it's enforcing allows it only to operate its stores at around break-even point.  Still, as more people go digital, all that money is going to add up. 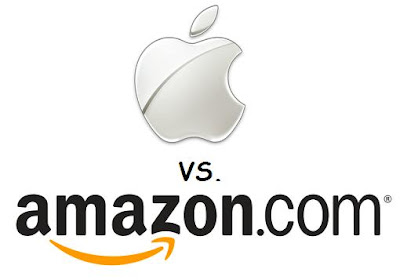 And this is even before Apple, with access to around two hundred million credit cards, begins to get into the mobile and online payment business.  I get the feeling that Apple isn't looking at credit card like transaction fees.  I think Apple wants a piece of the profit as well. Apple could leverage its considerable knowledge of its customers and move into deals with retailers in ways unlike anything we've seen before.

And Amazon, which has just reported its own Netflix-like earnings and missing expectations, expectations that were not unreasonable like those imposed on Apple, needs to be aware of that.

Apple will be working out deals with retailers not unlike one like its got for its app developers and the app store where it'll take a percentage of the transaction.  Probably not 30% but it'll want something in return.

Thus, it's unlikely that Amazon could come to some sort of a deal with Apple because of its already thin margins.  And with Apple and Amazon competing in the tablet and digital sales, Apple could possibly steal customers away from Amazon in areas where it will hurt Amazon the most.

How?  Essentially now, Amazon is uses profits from other areas to subsidize its digital content expansions and efforts.  Amazon is losing money on each of the Kindle Fire it sells, hoping to make it back through digital sales. At the same time, sales from other departments are allowing Amazon to make content deals like TV and movies for streaming or sale.

Once Apple gets into the payment business, one of two things or both will happen.  Apple will steal sales from Amazon because Apple will shepherd its iTunes users to its partners or Amazon will play ball and give Apple money.  And either way or both, Apple will wants its pound of fresh from Amazon.

Apple has built a large platform and with it a very lucrative ecosystem unlike anything we've ever seen before.  Even with Microsoft's desktop dominance, it is not able to extract the kind of money that Apple has been able to or will be able to.

The only way Amazon can escape this fate is if there is a wholesale departure of iOS and Mac users over to its Kindle platform.  Right now, Jeff Bezos and company, will need to convince investors that sacrificing  hundreds of millions, possibly billions today as it invests and builds out its digital future will bring in a lot of profits later on.

Of course, Bezos did it once just after the dot.com bubble in early 2000.  This time, Amazon will need to do it again against a vastly complicated and competitive Apple with $86 billion in the bank.