Would You Prefer an iPad Mini or iPod Touch XL?

My initial gut answer was "yes".  But honestly, I don't know.  What I want is vastly different from what Steve Jobs was willing to give up.  We never that that 5-7" iPod touch.  Instead, we got the iPad.  Now, the question is if we'll get the something between 3.5" and 10".

I don't know.  I'm sure Apple tested all the screen sizes - everything in between.  Here's the thing about what Steve said when he thought that people cannot sharpen their fingers to tap on small UI icons - I think he was talking about the keyboards.  His main objection was that input would be more difficult than

I think that has all changed with iOS 5. Two major improvements that pretty much alleviate Steve's fear.  First, in portrait mode, the user can divide the keyboard down the middle and allow the user to better type with two fingers.  If thumb typing works on the the touch and the iPad, it'll work on any device with a screen size in between 3.5" and 10".

Second improvement in iOS 5 is dictation.  I've been dictating more in the last couple of days.  It's very accurate.  A lot of time, I would dictate a sentence or two to stop and think.  It gave me the opportunity to evaluate the accuracy and make changes if necessary.  Need to say, as I become more comfortable with it, and I'm think you will too, tapping away on a screen will give way to dictation.

So, with input issues solved, Apple is really free to make another touch device with whatever size they want.  I'm comfortable with the 10" and I'm sure I can learn to work with a 6-8" screen. 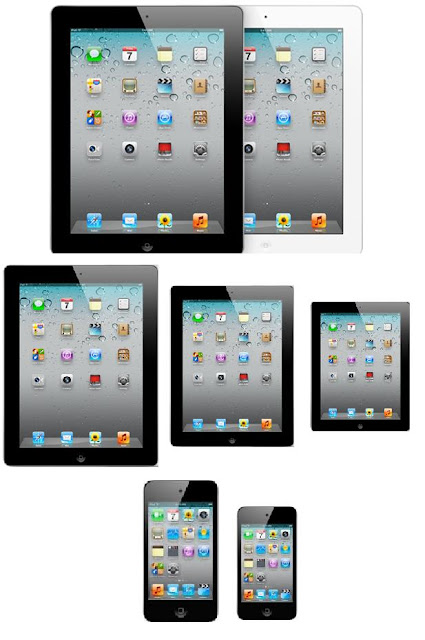 In the picture I kinda put together quickly, I want to show just what the various scales are.  Perhaps, it's my bad rendering (if you can call it that), but I prefer a small sized iPad, or an iPad mini as some folks like to call it, than an iPod touch with a 5" to 6" screen.

For the iPod touch, it comes down to the same reason why we did not see a 4" screen in the iPhone 4S and may not see it in the iPhone 5.  One-handed use with the thumb as the navigating digit means the thumb can reach the most real estate on a 3.5" screen than on anything else bigger.

Furthermore, a 7-8" iPad form factor with updated specs could allow Apple to do more.  Better specs, better camera, and bigger battery.  Such an iPad could be close enough to the 10" version that will allow Apple to use many of the same chips and designs and give Apple more room to play with the pricing.