I've read a dozen or so reviews on the new iPod nano from Apple.  While the general outlook for Apple's tried-and-true music player is sure to be great stocking stuffer, I've come to one indisputable conclusion about it.

Apple is testing new features on the tens of millions of users that are going to buy this little music player.  Apple did it last year with the watch-like form factor.  It was a hit among those who wanted to wear the nano on their wrist.  I reckon only true music and Apple fans would have done that.

This year, Apple is testing what amounts to be an iPod touch nano.  That's the only explanation I can think off.  So far, there is a lot of potential in this little thing.  I admit that I only have had a small hands-on time with it while I was at the Apple store a week ago while I wanted for my Lightning cables to be delivered to me.

Once you have had time with the device, you can kinda tell yourself, "had Apple release an iPhone nano, this is what this device would look like".  The 2.5" screen is a perfect size for those who wants something less than the 3.5" screen of the iPhone 2G all the way up to the iPhone 4S.

Instead of going smaller, Apple went bigger with the 4" screen in the iPhone 5.  However, a few years ago, rumors were abound that Apple would release an smaller screened iPhone.  As silly was it was back then, the 2012 nano shows that, perhaps, Apple has not completely dismissed this in their labs.

The ideas that were being thrown around could be seen in the various nano form factors.  The watch-body of 2011 was obviously an idea to test how a company device to a full fledged iOS device like the iPhone or an iPad.  It probably could have been BT tied to the Macs as well.

This year's touch-like form factor is to test how a smaller touch or iPhone would work.  And having millions of users test it in public would have given Apple valuable information on what how users are using the nano: to gather data on improvements they need to make and shortcomings that needs addressing. 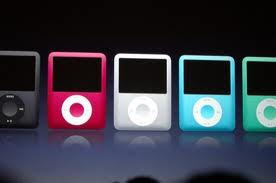 Like the fat nano from 2007, this touch nano could end up getting apps and connectivities in future upgrades - it's just too obvious that this will happen when Apple added the touch screen to the nano.

Right now, there isn't much that you can do with the touch nano.  And yes, the screen is multi-touch.  Outside of pinching photos, I'm not sure what Apple is expecting users to use the touchscreen for.  But if Apple devices to add Angry Birds or any number of popular but not too system-taxing games/apps to the device, the screen would be very useful.

The only thing that I don't understand the new design is the home button.  It's 2012.  We don't need that home button anymore.  Apple could have probably added a 3" screen to the nano, making it even closer to the 3.5" screen of the iPhone and the touch.  As Apple move to better chip designs that would increase power and efficiency, and decrease size of the chip, the nano could really thrive as a touch replacement.

The question is when will we see a fully functional nano with WiFi connectivity and app support.  There are probably a few conditions that Apple would like to meet before we could ever see the nano anywhere near what I am speculating.  We're likely to see this happen after Apple has a way to power management under control.  Right now, the nano can support up to 30 hours of music playback and only 3.5 hours of video.  The touch supports up to 40 hours of music and 7 hours of video.  3.5 hours just won't cut it.  Even the iPod classic supports up to 6 hours of video playback.  For me, that's barely tolerable.  And there is no telling how many hours of app uses the current nano can support but we can guess it's probably no where near the battery life of the touch.

Also, with respect to the touch screen, 2.5" is pretty small.  If you want to text or write an e-mail, the 2.5" screen just won't cut it.  I have no idea how Apple hopes to overcome that.  Maybe Apple figured out that a 2.5" screen would just barely support wide-screen typing.  It's also possible that dictation would come into play when the nano has WiFi support.

And finally, there is also trying to get developer support for the nano.  Obviously, it's unlikely the nano will ever support a full sized touch or iPhone app.  Therefore, like the nanos with game support of yesteryear, Apple may have a to create a subsection of the App Store dedicated solely to support the nano.  And most of these apps, if not all, will be games.  If Apple manages to sell tens of millions of these a year, we can see Apple increase its push into mobile gaming.  Of course, the ideal situation would be if this nano can support iOS games natively.

So, yes, nano users are beta testers.  Willing and paying beta testers at that.  Is that a good thing?  Well, as the old saying goes, you get what you paid for.  And with the nano, you are buying the best mp3 player on the market within a great ecosystem.  And if I'm right, Apple could add features to it just like it has done so in the past.  Maybe new apps.  The gorgeous 2.5" screen is just screaming out for it to be used more than Apple is currently letting on.