It's a new week.  So it is worth noting that we are inching closer and closer to the October iPad and even Mac event.  I just want to quickly point that that the date of the invitations sent out for the iPad mini event and the event itself last year was a week apart.

Today is Tuesday,  obviously.  October 8th. That means for an Apple event to take place next Tuesday on October 15th, we need to see the privileged few bloggers and journalists receive and brag about their Apple invitation today. 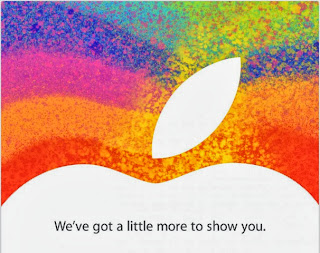 This pic here was from the invitation last October.

As I've mentioned in a previous post, Apple is likely to host their event on October 22nd and with the new iPad will probably go on sale on November 1st.  Plus, Nike, a close Apple partner, will be hosting their own event next Tuesday.  It's unlikely the two companies will host concurrent events even if they are not necessarily competing events.
at October 08, 2013